The Mumford and Sons are returning to Troy, Ohio – but this time, it’s a bit different. There’s no performance, just a band coming back to find their long lost Mumford sons.

In the fall of 2013, Troy hosted the Mumford band on their “Gentlemen of the Road” tour. During their visit, the band members claim that they “made love with various local women,” and are now returning for another “stopover” to meet their own Mumford sons.

Memories are one thing to Marcus, but his bandmates claim they don’t remember much from their visit.

“We were so wasted throughout the tour. So much booze. Lots of crazy folk rock stuff. It was a great time. But yeah, definitely not surprised we have some children here in Miami County,” said guitarist Winston Marshall.

The reunions with their Mumford sons will be more than just sentimental. Frontman Marcus claims that it’s helped him break out of writer’s block.

“We’ve learned a lot of lessons from this: what it means to be a father, how one night can change everything, and how distance makes the heart grow fonder. Shit, I could write a platinum record about that,” said Marcus, as he swiftly pulled out his notebook and pen.


The band plans to return in mid-January to drop off 6 years of child support checks.

“I’m hoping we can bring the little guys on our next tour. It’s a great way for the kids to see the world, and how cool their rockstar daddies really are,” said Mumford.

Subscribe to the Miami County Bugle Caller so you don’t miss out when the band’s tour bus passes through the downtown Troy square.

Town Phone Reelected for 126th Term as Mayor of Phoneton

Troy Has Changed Its Official Colors to Navy and Orange, And Here’s Why: 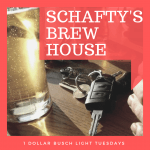