On a windy October night in 1955, a woman reported that she saw a little shadow boy in the downtown Troy water fountain. The weather was frigid, and she was concerned about his warmth. She waved to him, and asked where his mother was. He replied “the eternal shadow realm of night’s end,” and dissolved into thin air in front of her. The witness might have been bat-shit crazy, so take it with a grain of salt, but it’s technically still a mystery.

In 1980, several West Milton locals received bizarre letters from an anonymous author. These letters were extremely personal and accurate, leading numerous victims to contact police. One case involved a detailed letter which humiliated a man for regularly eating dogshit in his backyard after mowing the grass. The identity of the Writer is still unknown, but the letters have scarred victims forever.

3. The Disappearance of Ersan Fiddlehorn

Do you remember Ersan Fiddlehorn? As Chairman of the Discover Troy Initiative, Fiddlehorn was the driving force behind Troy’s decision to change the city’s colors to navy and orange. He was frequently linked to Troy’s mysterious “Walnut Society,” a group of anonymous donors who “support various community programs.” In June of 2019, police issued a warrant for his arrest for mishandling donor money. Ersan quickly fled the county, and was last seen speeding down Polecat Road. His whereabouts are still entirely unknown.

4. The True Identity of the Mayor of Tipp City

According to tdn-net.com, the mayor of Tipp City is named Joseph Gibson. The strange thing is that nobody knows actually who that is. Has anybody seen or met this person? Who’s really in charge? And who’s letting them erect high-rise skyscrapers in downtown Tipp City?

5. How Did This Statue End Up Behind Sub House?

Seriously, how did this statue end up behind Sub House? If you know, please leave intel in the comments.

Now that you’ve read MCBC’s list of the top 5 Unsolved Miami County Mysteries, you have all of the spookiest local stories to tell your friends. If we forgot anything, leave a comment! We love to hear from our readers! 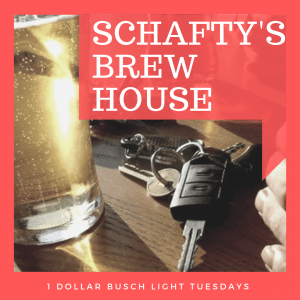